This week’s blog post comes from Theresa Mackay. Theresa is a second generation Scottish-Canadian who was at press time completing her Master of Letters in Scottish history through the University of the Highlands and Islands in Scotland. She runs Larchgrove Marketing Group, a tourism consulting company for projects with Scotland in their soul.

Located on the southern tip of Vancouver Island, the city now known as Victoria, British Columbia, saw permanent settlement of Scots as early as the mid-nineteenth century. Founded as a trading post and fort location for the Hudson’s Bay Company (HBC) in 1843, Scottish settlers were drawn to the location by promises of HBC employment and land ownership. Hailing from cities such as Inverness and Edinburgh, and departing from HBC recruitment centres such as the Orkneys and the Hebrides, Scots emigrated to Victoria; some for adventure and others in search of a better life.

By 1858, seven years after HBC Chief Factor and son of a Glasgow merchant, James Douglas, had established himself as the first Governor of the Colony of Vancouver Island, five hundred Scots and Europeans lived on the traditional territory of the Coast Salish First Nations. The main surge in emigrants to Victoria came that year with thousands of various ethnicities arriving to seek their fortunes, driven by rumours of gold on the mainland of the colony of British Columbia. In six weeks, 225 buildings were constructed in Victoria, including hotels, saloons and retailers, in order to service the transient gold-seekers stopping for supplies; the settlement’s population quickly ballooned and the landscape responded. [1] 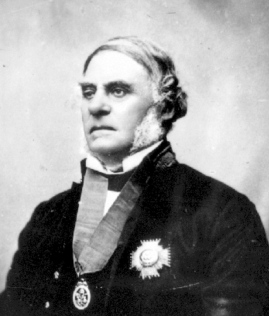 Sir James Douglas, the son of a Glasgow merchant.

Although one of the smaller ethnic groups, Scots in Victoria were a force in local politics, community leadership, and business. In addition to Governor Douglas and the preponderance of Scots-born HBC workers, many Scottish emigrants such as Dr. William Fraser Tolmie, Robert Rithet, and Roderick Finlayson held influential, high-profile positions. Victoria was on its way to becoming a city led by Scots and with this came the founding of Scottish associations, clubs, and societies for the purpose of assisting Scots immigrants and connecting with others from their culture, mainly through dinners, celebrations, and sporting events.

The St. Andrew’s Benevolent Society (SABS) was just such an association. It was founded in early 1860 and later that year it organized a St. Andrew’s dinner for 120 people at the Colonial Restaurant on the east side of Government Street. With many distinguished guests in attendance, including Governor Douglas as the SABS Honorary President, it was touted as the “largest public dinner ever given in the Colony.” The event went long into the night with more than 24 toasts, including one to “The Ladies” responded to by “Mr. Pendergast,” suggesting that women were not in attendance as honoured guests, or at least not invited to speak. [2] 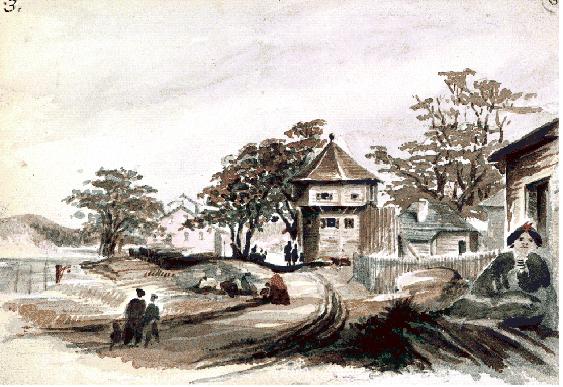 Three years later, the Caledonian Highland Society of Scotland was the model for the formation of the Caledonian Benevolent Association (CBA) and within six years their Annual Dinner celebrating Robert Burns was “the largest in the Colony” with “their banquets [being] noted for the harmony and good taste which invariably prevail.”[3]

In addition to the socialization of Scots through events, the purpose of both the SABS and the CBA was a charitable one aimed at supporting Scottish immigrants, suggesting that members desired a strong and healthy Scots community in Victoria. Similar mandates caused the two groups to merge in early 1870, forming the St. Andrew’s and Caledonian Society (SACS). Later that year they held a St. Andrew’s dinner at the Oriental Restaurant on Yates Street. Tickets were three dollars each. [4] 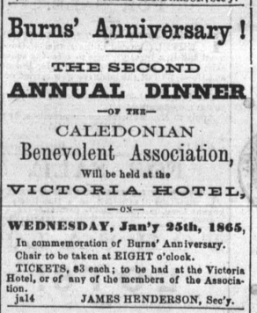 By the time Vancouver Island joined Mainland British Columbia in 1866 and the province joined Confederation in 1871, the resident population of Victoria – now the capital city – had swelled to 3,270 [5]. Colonial society was in full swing with residents, regardless of ethnicity, enjoying outings organized by the SACS, including the “annual gathering” at the Caledonian Grounds on Cook Street, with foot races, dancing competitions, and a “grand lottery” for ladies only. [6]

In 1889, the Sir William Wallace Society (SWWS) formed and added to the city’s social calendar, focusing on organizing parties and sports gatherings such as Hogmanay celebrations and Highland Games. Its original membership numbered more than fifty, suggesting that some SACS members may have belonged to more than one Scots association in the city. [7]

The Sir William Wallace Society organized parties such as the “Grand Halloween Concert and Dance” in 1891. Source: Daily Colonist newspaper 1891-10-28.

By 1891, with a population more than five times that of twenty years earlier, those born in England and China outnumbered those born in Scotland, and immigrants with Scottish-born mothers and/or fathers were significantly less than England-born.[8] These numbers suggest that those who identified as Scottish were a smaller ethnic group and as a result may have felt the need to exert their Scottishness through organized ethic associations in a way that made other cultures aware of their existence and their difference.

The SWWS responded in August of that year by joining forces with the BC Scottish Pipers’ Association to organize the “Grand Gathering and Games” with a variety of contests including “Best Dressed Highlander in Full Highland Costume.” [9] This and other public expressions of Scottish ethnicity combined with the prominence of Scots leadership in Victoria suggests that Scots felt vindicated in proudly displaying their culture.

Victoria inner harbour in 1897 said to be taken from “cathedral tower,” likely the tower of Christ Church Cathedral.

As a “city led by Scots” with organized associations flourishing at the end of the nineteenth century and a full social calendar as a result, Scottish emigrants to Victoria created a proudly Scottish community. Whether in the hopes of a better life or the allure of a new frontier, Scottish settlers to Victoria never left their culture far behind.