This week’s blog comes from Jazmin Hundal. At press time, Jazmin was a history major and an International Studies minor at SFU. She has always had a passion for history and travel, often finding that she can travel the world through the lives of those who have made history. Jazmin has some family in Northern Ireland, and on her last visit there, became curious about nearby Scotland. She is immensely excited to have had the opportunity to learn a little about its people through her own research for Scottish history courses at SFU.

John Thomas Scott, a Scottish man born in Dunoon, led a life full of interest. While some of the facts surrounding his life may be questionable, as they come from small-scale newspapers that tended to report local lore as fact, the story that results is that of a real person. While elements may come across as fantastical, most of the events in his story were likely to have happened, and so are worth exploring here in this post.

Born on October 13th, 1821, Scott lost his father at the age of twelve, prompting his mother to leave him under the care of his uncle. With this uncle, he traveled to the West Indies in 1832, returning to Britain two years later. Although there are no available accounts of what Scott did during those years in the West Indies, it is possible that he and his uncle were in some way involved in the sugar or cotton plantation economies that thrived in that area during that time.

Upon his return in 1834, Scott enlisted as a musician in the Thirteenth Argyleshire Rifles, with whom he traveled to Halifax, Nova Scotia. Twelve years later in 1846, Scott moved to Pennsylvania, and enlisted on the American side of the Mexican-American War (a conflict that ran from 1846-1848). Like some of his fellow Scottish volunteers, Scott registered himself beforehand under a different name, as John Thomas Dunoon. This shrewd move allowed him to continue to collect a pension from the American army for the rest of his life, even when he later moved to British Columbia.

However, in terms of his military career in the American army, Scott was better known for his time spent as a Mexican prisoner of war. Injured at the Siege of Acapulco, he was taken prisoner by the Mexicans. It is not clear how long he was a prisoner of theirs, but it is clear what he claimed to have happened during that time. According to the reports of the newspapers, Scott learned the “Mexican language” (otherwise known as Spanish) from his captors, and quickly gained their trust. After having gained this trust, he led them into an ambush by the American army, through which he was freed and subsequently promoted to the title of sergeant.

While this last part of his story should be taken with a grain of salt, the next few decades of his life were likely to have happened. Scott is reported to have traveled to California to take part in the gold rush there in 1848 (after the Mexican-American War had ended). He didn’t find any gold; however, he did find a wife, a local woman named Elizabeth Ann Williams. Scott would have been thirty-six years old at the time, and his wife nineteen.

In 1858, after having their first child together, Scott and his wife traveled north to pursue the Cariboo Gold Rush along the Fraser River. After arriving in Victoria en route to the gold fields, Scott found employment at the Victoria Hotel before sending for his family to join him (today currently on the corner of Government and Courtney streets).

After having their second child in Victoria in 1859, Scott chose to move his family once again, this time to New Westminster. He set up the Pioneer Saloon there, which was rumoured to have begun as just a tent over a stump. Whether or not this was true has yet to be proven, however, it seems that Scott found success in the saloon business, as he set up another one in Barkerville three years later, named the Scott Saloon. He had moved there to follow the Cariboo gold rush, where he acquired forty thousand dollars.

After making this significant profit, the avid entrepreneur returned to New Westminster and invested a portion of this money into steam boating on the Fraser River. In 1863, he also found a calling in public office, as he was elected the to first New Westminster Health Board.

In 1865, tragedy struck the Scott family, as they lost three of their young children to premature deaths. Their seventeen month old, five year old, and six year old died of spasmodic croup, and were buried in the Douglas Road Cemetery. The drainage was apparently so poor in this area that the coffins had to be stood upon to keep them down while the soil was being shoveled onto them.

Five years later, in 1870, Scott was back in the public eye when he founded the May Day Celebrations in New Westminster. He was a key part in these celebrations, and was until he died. 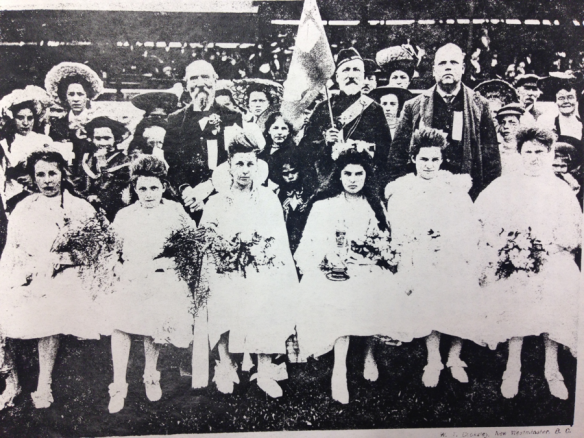 In 1884, John moved his family again, this time to Port Moody. In partnership with his son-in-law, Robert Brenton Kelly, he set up the Caledonia Hotel. This was his last business venture, as he died in 1908. His wife, Elizabeth, survived him by three years, passing on in 1911. John and Elizabeth left forty-eight living direct descendants, seven of those being their children, and thirty-six being their grandchildren.

By the time of Scott’s death, he was a well-known public figure in New Westminster. Shown here are images of an invitation to his funeral procession, and of the lengthy procession itself, which went down Columbia Street on February 16th, 1908. His story was well known by the locals there, and he was regarded as an individual who had traveled the world and contributed greatly to the establishment of New Westminster. While it is likely that some elements of his story had been fictionalized (such as the tale of him gaining the trust of his Mexican captors and using it against them), his life tells us how ordinary men became local heroes in the mid to late nineteenth century. In the larger context of Scottish migration to B.C., he represented the adaptability and work ethic of Scottish emigrants to other settlers in the area. In addition, these newly formed communities clearly loved a good story, and were eager to accept one when it came their way. John Thomas Scott is proof of that, and was celebrated for the things he had done and may have done during his North American travels.