At press time, Catherine Hogg was in her fourth year at Simon Fraser University, completing a joint-major in English and History. Born and raised in British Columbia, Catherine developed a keen interest in Canadian History in her senior years of high school, with a specific focus on her home province. While BC History is only one of a myriad of histories that have captured her interest, she hopes to continue exploring past narratives that unfolded on land she will always consider to be her home.

Agnes Deans Cameron was born in 1863 to Scottish parents in Victoria, British Columbia. Between her birth and her tragic death in 1912, Cameron led a whirlwind of a life. She excelled in school early on, completing the provincial teacher’s examinations at only 16 years old while still a student at Victoria High School. She began teaching thereafter, moving between schools on Vancouver Island and the Lower Mainland, eventually becoming British Columbia’s first female principal at South Park School, in James Bay, Victoria, in 1894. Cameron was an opinionated and strong-willed woman and used her rising influence to argue publicly to support women’s suffrage and for a more liberal education curriculum for BC’s children. For example, she became infamous for posting the notice: “Irate parents will be received after 3:00pm” on the classroom door at the Hastings Mill School in Vancouver.[1] Finding herself in no less than three public scandals that put her teaching ability into question, Cameron was ultimately suspended from teaching.

However, Cameron left the BC education system undeterred. As she said in her own words, “[l]ike most over-sea girls, [I] was brought up to do something and to earn [my] own living.”[2] After helping pave the way for women entering into the then highly patriarchal world of education, she began an illustrious career in journalism. Always shrewd, Cameron noted that this career turn “offere[d] . . . a wider educational field than teaching,” although she admitted that her old life as a school teacher was “deeply interesting work.”[3] Nonetheless, she moved forward. She relocated to Chicago, as the city afforded her a convenient halfway point between her publishers in New York and the Canadian railway in Edmonton. It was here, while writing about Canada’s Wheat Belt for various American journals, that she conceived of the idea of a voyage that she deemed “the greatest trek the world has known.”[4] She decided that she would travel from Chicago to the Arctic Ocean to explore the lands that so fascinated her, as well as to encourage immigration to Canada, a cause she felt passionately about.

Cameron partnered with the Hudson’s Bay Company, who she credits for the success of her journey, as they provided all the facilities she needed. She decided to bring her niece, Jessie Cameron Brown, as her companion and secretary. In the spring of 1908, with Cameron’s typewriter and Kodak camera in tow, they departed. They were the first white women to travel to the Arctic. Their 10,000 mile trek is described in great detail in Cameron’s best-selling book, The New North, which was first published in America in 1910 before being released in Canada. Her chronicles are fully illustrated with her own travel pictures, resulting in an invaluable historical resource.

Cameron’s book is, unsurprisingly, highly pedagogical. She recounts her tale through the lens of a teacher lecturing her students, although she is not shy in critiquing the education system. Though Cameron never questions her own racist views on “the Indians,” she rightfully implores that the (presumed to be white and middle-class) reader recognize that the “text-books [they have] been weaned on” are falsely depicting the Inuit peoples. In the section of her book entitled “Arctic Red River and its Eskimo,” Cameron succinctly begins the chapter by writing that the stereotypical “Eskimo” they expected to meet upon arrival was not to be found. She devotes the entire chapter to praising the Inuit peoples, and does so by derisively dragging down other Indigenous groups, highlighting her complex attitude towards Indigenous people. She claims that “[a]n Indian is always trying to impress you with his importance,” whereas the “Eskimo is a man who commands your respect the moment you look at him.”[5]

Photo taken by Agnes Deans Cameron ca. 1908. Photo Courtesy of BC Archives – Item I-67668 – A view at the mouth of the Mackenzie River showing an Eskimo man with his topek, or hut; kyack, or small boat, and his oomiak, or his big boat. 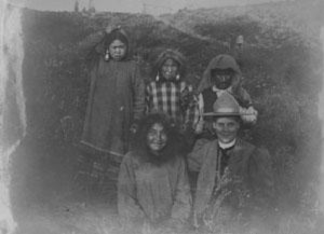 The contradictory chapter concludes on an interesting note; after her glowing praise of the Inuit families she visited at the Arctic Red River, she reminds the reader that the “intrusion of the whites has changed the whole horizon [t]here,” and that their arrival is less “the coming of civilization” and more “the coming of commerce.”[6] She then moves on to specifically praise, quite unexpectedly, the educational lives of Inuit children. As a schoolteacher herself, and an austere one at that, it is noteworthy to read her claims that “the Eskimo children,” despite no access to Western concepts of education, “were better behaved, more independent, gentler, and in the literal sense of the word, more truly “educated” than many [white] children are.”[7] Cameron’s – arguably patronizing – view shows that she could never quite distance herself from her past as teacher, and could not help but posit the Inuit peoples proposed superiority in terms of education and learning.

“The Missionary Hymnal for the Indians.” Image of a Cree translation of a Christian hymn, ca. 1908. Photo from Agnes Deans Cameron’s The New North.

After Cameron’s travels to the Arctic, she spent the rest of her life writing, traveling, and lecturing to sold-out auditoriums in Canada, the United States, and the UK. She avidly promoted Canada as a superb destination for immigrants, and in doing so became a part of Canada’s own growing national identity. A year after returning from her travels, she lectured to a full house in her hometown of Victoria on September 28, 1909. The event was reported on the following day in the Victoria Daily Colonist with high praise and admiration for the speaker, writing that Cameron was referred to by the evening’s presider as “a resident of Victoria . . . of whom the city should be proud.”[8] On October 12, 1911 the same paper noted her recent return to the city, and congratulated her on the “sterling work she ha[d] done in making Canada as it really is known to the world at large.”[9] Cameron was praised and revered for her academic research and lectures, and specifically commended for her contributions in helping create a Canadian identity. Her outspokenness and opinionated manner became an asset in her new career field, instead of the impediment it once was.

Agnes Deans Cameron was only 48 when she died tragically in Victoria in May of 1912 at the hands of a sudden bout of pneumonia after an operation. One can only imagine what more she may have achieved if her life had it not been cut short. It is clear from her writings and lectures, however, that she stayed true her roots in both the world of education and her home in British Columbia.